After a shift in focus from the “new and cool” to the “usable by more people than those with perfect vision, hearing, motor skills, reading ability, brand new web browsers and massive screens”, I find myself doing almost everything with an eye toward accessibility.

One of the most basic but overlooked aspects of web accessibility (including PDFs) is the art of writing useful descriptions in the alt attribute of images. From experience, they’re often either ignored entirely or written in a way that has no benefit to a person using a screen reader or with images turned off (for example, alt="Image of a dog").

While reading a biography recently - on a NOOK e-reader, which has no text-to-speech or audiobook functionality (tisk tisk, Barnes and Noble) - I came across the obligatory middle section with images from the subject’s life from childhood onward (it’s Cory MacClauchlin’s biography of the prodigious yet tragic life of New Orleans author John Kennedy Toole). The images and their captions exemplified an excellent approach to writing alt tags - especially this one: 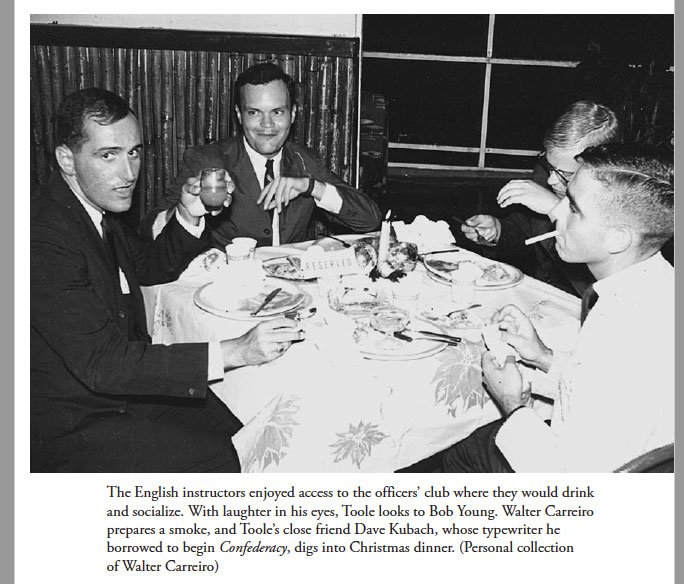 (Credit: Cory MacClauchlin from his book Butterly in the Typewriter: The Tragic Life of John Kennedy Toole and the Remarkable Story of A Confederacy of Dunces)

The image caption - which would be the value of the image’s alt attribute in HTML - is “The English instructors enjoyed access to the officers’ club where they would drink and socialize. With laughter in this eyes, Toole looks to Bob Young, Walter Carreiro prepares a smoke, and Toole’s close friend Dave Kubach, whose typewriter he borrowed to begin Confederacy, digs into Christmas dinner.”

This particular scene is incredibly important in the overall context of Toole’s life and the subject of this biography. Imagine this image on a web page describing Toole’s days as an English instructor in the military, before his mental illness took hold and started his descent. While this description might be a little long, it vividly describes the scene and has a specific purpose - to explain a snapshot of Toole’s demeanor at a certain point in his short life.

While this article detailing best practices around image alt tags is required reading, I’d like to add a few tips of my own based on MacClauchlin’s caption.